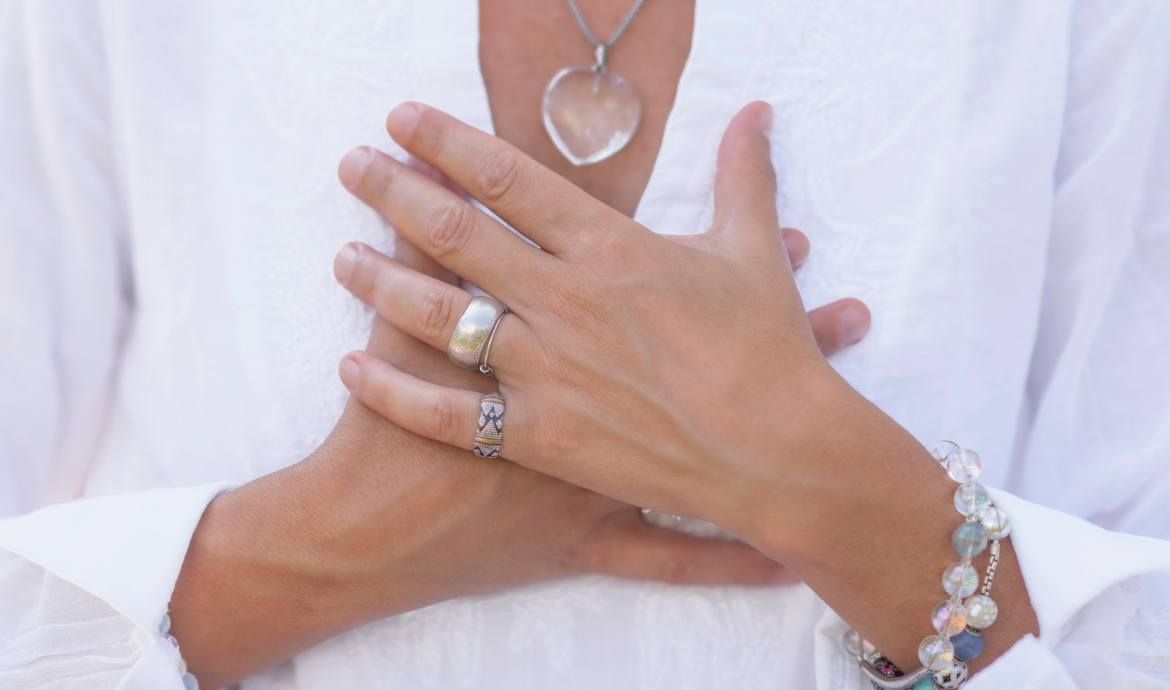 What can happen after just one TBT session…

Wiring and rewiring moments like that is quick. I have supported people to transform disabling though patterns such as phobias and traumas with as little as one session – if the person is truly ready and willing to LET IT GO.

Here’s a quick case study: I had one session with Elizabeth Grojean just before she left Ubud to move back to New York. She had booked in because she realised she had a fear response to the idea of selling out of stock in Baloo, her ecommerce business, and she knew this thought pattern was limiting her growth and prosperity, as well as hindering those who benefit from her product (Weighted blankets are a wonderful way to calm the nervous system naturally; they offer relaxation through deep pressure touch and they are especially helpful for people experiencing anxiety and insomnia to sleep soundly through the night.)

So she came to see me for a session and together we uncovered the root of the issue was the fear of the unknown. This is quite a common fear. And like with most people that come to see me – they know what it is they don’t want. This is their current reality – the default state. In order to reprogram it, we need to replace it with something else – the desired state. The brain needs to be given a quality instruction it can follow. And alas, those that haven’t learned the language of the unconscious typically have no idea how to do this.

Sometimes when folks come in for session they already know what it is they desire, and sometimes we discover it together during the session. In Elizabeth’s case she knew that she wanted to feel comfortable and steady amidst uncertainty. So I used one of our many incredibly effective tools (Reboot The Brain) to clean up the coding in her brain so that the default state was re-written with the desired state.

At the end of it she said, “That was the strangest experience I’ve had yet in Ubud. And that’s saying a lot!”

This type of deep unconscious reprogramming is quite strange for those who haven’t experienced it before. It’s a big leap from the conscious affirmations she had been doing with her coach where she writes down the old belief in pencil and writes down her new belief in pen.

I can’t truly gauge how effective a session is until that person is in a context where they had previously responded in one way and then a new response organically emerges. That’s how I know we’ve done good work together, so that’s what I invite my clients to look out for.

When I checked in with Elizabeth the following day to find out how she was, and what shifts and integrations had occurred, she responded by saying “Amazing!…Driver taking me to the airport asked me how business was going- instead of the usual swirl of emotions, I just said “Great!!!” I feel the anticipation of the unknown but it is an EXCITING feeling, not scary! It is a real shift.”

Then, just two weeks later she shared this in the women’s business group that we met through:

“Some champagne moments this week that I just want to share! Baloo was featured in a blog (which I didn’t even know about) and for the last two days has sold 12 blankets a day ($2,000 + !!) Before this, the record was 8. Here’s the blog: https://9topbest.com/best-weighted-blanket/

This is yet another bi-product of doing deep work and shifting things on an unconscious level – “things” seem to magically align in the real world. This is what people really mean when they talk about “calling it in” – their conscious and unconscious are so aligned in their focus that they “manifest their desires” with seemingly no effort on their part.

In fact, it’s this alignment that is the effort. When we priortise that, the rest follows easily, just like in Elizabeth’s case. She made a decision about something she’d been pondering for years. This is probably the most common thing I notice when I do this sort of deep dive work with people. It even happened to me the first time I experienced unconscious brain training with Deb Maes back in 2013. In the span of one week I started creating the Journal of Heartwork & Gratitude (something I’d contemplated doing for years), I recording a video for my website that I’d been putting off doing for two months, and I signed my first Diamond client – someone in my community who (seemingly randomly) reached out to me.

Of course I know now that nothing really is random. Everything we’re experiencing (or not experiencing) externally is a reflection of the reality we’ve constructed for ourselves internally. Change the inputs and you can’t help but change the outputs – that’s just how a system works. But I didn’t realise that then and so I often felt frustrated and stressed out like whoa.

That first session with Deb was the start of my deeper understanding of the incredible equipment we have in our three brains (head, heart, and gut). It was also the beginning of my commitment to continually upgrading my internal software – a practice I’m still super passionate about today. So much so that now, nearly 5 years later, Deb and I co-created and co-deliver Your Success Code, a year long brain training program to help unify both the conscious and unconscious mind.

Without the action I took then to create this gorgeous gratitude journal, I wouldn’t be receiving notes of appreciation from so many brilliant beings about how much they love using it. As I wrote in the article Gratitude is Too Powerful to Take for Granted, a daily gratitude practice is the equivalent of brushing your teeth. Just as healthy teeth and gums depend on that practice, so too does your brain’s ability to create the life you truly desire depend on your appreciation of the one you already have.

The most effective way to reinvent reality entails appreciating your current reality.

Does that seem paradoxical to you? This concept can be really tricky for people to wrap their minds around. We’ve got to first be ok with whatever is showing up here and now – make peace with it. Then only can we reduce the fear-induced friction enough to move forward towards the aligned action available here now.

So, if you’re ready to levelUP your life, and you’re curious to learn the most effective and enduring ways Deb and I have discovered in our 30 years of playing in this space, book in for your free Spotlight Session today. Don’t ever underestimate what’s possible for you from just one session. 😉